ATTENTION: We are experiencing technical difficulties with our login and checkout systems. If you experience an issue, please check back later. Sorry for any inconvenience.

What Is a Ledger Board? 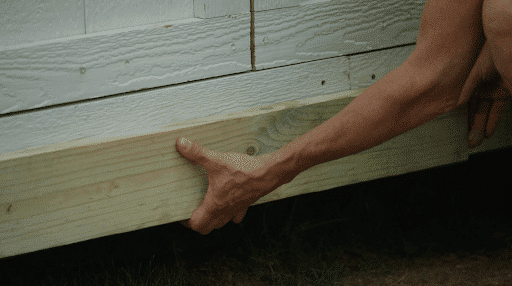 A ledger board is the most critical part of an attached deck—it’s what fastens the deck  frame to the house or other building, after all. A poorly installed ledger board risks the  integrity and safety of the whole deck. For successful deck construction, it’s worth learning a bit more about ledger boards and how they’re installed.

What is a ledger board?

Attached decks, or ledger decks, are fastened to a building’s wall using a piece of naturally decay-resistant lumber, pressure-treated dimensional lumber, or engineered lumber known as a ledger board; often simply referred to as a “ledger.” It’s usually bolted or screwed to the structural framing inside the adjoining building. The deck joists are attached to the exposed face of the ledger board using metal joist hangers.

The ledger board transfers roughly half of the weight of the deck and the live load on the deck to the framing of the adjoining building that is supported by the building’s foundation. The other half of the deck loads are supported by a beam, posts, and footings along the outside edge of the deck. If a deck ledger fails to adequately support its share of the deck loads the deck can collapse. The two main reasons for structural weakness and deck collapses are improper fastening and water damage to the house structure that the ledger is attached to.

Freestanding decks, as the name implies, are self-supporting. The weight of the deck and the live load are borne by its beams, posts, and footings, so there’s no need for a ledger board. The choice between the freestanding or attached deck style is informed by factors such as suitability of the adjoining building to support a deck ledger, location of the deck, and builder preference.

Choosing the right ledger board for a deck

A ledger board is made of pressure-treated or naturally rot-resistant dimensional or engineered lumber. The depth (height) of the ledger board must be equal to or taller than the lumber used for the deck joists—usually this is 2×6 or larger. The board should ideally be straight, with as few defects as possible like an excessive number of knots and splits.

Attaching a deck ledger board

The International Residential Code (IRC) prescribes two generic fasteners for attaching a deck ledger to the rim joist of the adjoining building: 1/2 inch diameter hot-dipped galvanized (HDG) lag screws and 1/2 inch diameter hex-head HDG machine bolts along with 1/2 inch HDG washers under the heads and nuts of each fastener to distribute the load over a broader surface area.

Note: A common type of bolt referred to as a  “Carriage bolt” is not recognized by the IRC and is not equal in strength to hex-head bolts so should never be used to fasten a deck ledger to a house. Carriage bolts have a cap style head with a square portion of the shank under the cap.

The IRC has a deck ledger fastening table that outlines how far lag screws and hex-head bolts can be spaced apart along the ledger based on the span of the deck joists from the  ledger to the beam along the outside. Figures in the IRC illustrate where the lag screws or hex-head bolts are located on the face of the ledger and through the rim joist. The  fasteners need to be placed in two rows along the length of the ledger in a ‘W’ pattern  with minimum and maximum distances between the ledger and rim joist edges.

The IRC and engineering standards that the IRC is based on include other general notes about proper fastener installation, including:

Two holes need to be drilled to prepare the ledger board and the rim joist to receive each lag screw. A clearance hole with a minimum diameter of 17/32 inch to a maximum of 9/16 inch is drilled through the ledger board to clear a pathway for the shank of the lag screw.

A pilot hole is drilled through the rim joist that closely matches the root diameter of the threaded portion of the lag screw. Acceptable pilot hole diameters are between 5/16 inch and 3/8 inch. The tips of the lag screws should penetrate beyond the inside face of the rim joist by at least 1/2 inch for the building inspector to verify proper installation and lag screw length.

A minimum diameter of 17/32 inch to a maximum of 9/16 inch clearance hole is drilled through the ledger board and the rim joist. The bolts must be long enough so at least 2 or 3 threads extend past the nut on the inside.

3. Spacing the deck ledger off of the face of the wall.

The IRC deck ledger fastener spacing table lists a section for spacing the ledger off of the face of the sheathing. This method eliminates the need for flashing on top of the ledger.

4. Securing a deck ledger to a concrete foundation.

The deck ledger can be fastened to the adjacent structure’s foundation instead of the framing. This allows the surface of the deck to be set one or more step heights below the floor level inside the house, which may be desirable in snowy or wet climates.

HDG or stainless steel expansion anchors (also called ‘wedge anchors‘), stainless steel concrete screw anchors, or adhesive anchoring systems can be used to fasten the deck ledger. The IRC does not have prescriptive spacing for the fasteners so follow the anchor manufacturers’ installation instructions and verify the local building official will permit their use.

5. Securing a deck ledger to a concrete block (CMU) foundation.

Concrete blocks have hollow cavities. When the cavities have been filled with concrete (a process referred to as “grouting”), you can use the same anchors as a poured concrete foundation to install a ledger. When the cavities are hollow the ledger fastening approaches become limited.

The simplest method is to use a screen-grid adhesive anchor system. HDG or stainless steel rods are secured to the hollow block walls by blobs of epoxy or acrylic adhesive that are injected into wire or plastic retainers inserted into drill holes. Check with the anchor manufacturers’ instructions for specific deck ledger installation details and anchor spacing.

Several structural screw manufacturers have designed screws for mounting deck ledgers to the framing of adjacent structures. The screws are easy to install with a drill-driver and usually don’t require the pilot holes that lag screw installation does. Each manufacturer has specific installation instructions and fastener spacing tables unique to each screw. Fastener  spacing tables and instructions for one manufacturer’s screws cannot be used with another brand of screw since each of the screws has a different design capacity.

Each manufacturer usually covers special conditions in their instructions. For example: Some manufacturers prohibit the use of impact drivers to install their screws. Also, the screw tips must  penetrate a minimum amount into or through dimensional or engineered lumber to meet the allowable deck and live loads, and for the local building inspector to view and verify proper installation.

There are several specialty deck ledger mounting systems designed to solve ledger installation challenges. Deck ledgers cannot be fastened to veneer brick, stone cladding, adhered stone, synthetic stone cladding, walls with thick exterior insulation, or in cases where an air space greater than 1/2 inch is called for. These mounting systems enable the deck ledger to be spaced between 3 inches and 6-3/4 inches off a building’s wall surface.

Flashing a deck ledger board

Flashing prevents water from leaking below or behind the cladding or deck ledger. It can be one material or a combination of materials. The IRC requires that deck ledgers have a flashing system installed above and below to prevent water from entering wall cavities or reaching the framing of the adjoining structure.

The IRC requires metal flashing that is corrosion-resistant and at least 0.019 inch / 26 gauge thick. Other materials may be used like PVC or other plastic, or self-adhering membrane flashing—provided they comply with the IRC requirements and/or are approved for use by the local building official.

Flashing is shaped like an L or a Z with a wall leg that is tall enough to be covered by the water-resistive barrier and by the siding that’s above the top of the decking surface.

When the adjacent structures’ wood framing is below the bottom of the deck ledger, a second flashing needs to be installed behind and below the ledger, as well as on top of the surface of the wall cladding. This is arguably the most important step, as water leaking in behind the ledger board can lead to rot and decay in the adjacent building’s framing—which could lead to it failing to support the deck ledger and the deck collapsing.

MT Copeland offers video-based online classes that give you a foundation in construction fundamentals with real-world applications, like how to build a freestanding deck.

Classes include professionally produced videos taught by practicing craftspeople, and supplementary downloads like quizzes, blueprints, and other materials to help you master the skills.

How to Read Blueprints

How to Build Shaker Cabinets

The only thing Mike Guertin likes better than building new homes is remodeling old ones. After 40+ years tackling every facet of residential construction from excavation and foundations to interior finish work and tile setting, he’s still challenged every day to find more-efficient ways to build better. Mike worked on his first deck build when he was 15 and fortunately it was less than a foot off the ground so no one got hurt when it fell apart several years later. Now he takes deck building a little more seriously - but only a little bit.

How to Install a Shower Pan: 5 Steps

What Is Recessed Lighting?

8 Types of Bathroom Tile to Consider